The pinhole route to Enlightenment

It was de ja vu time for the PSM members who assembled at Prabakaran’s iStills Studio on Mount Road on Feb 1, 2014. They were taken back in time, to dark rooms and the smell of chemicals, and the school days when butter paper stuck to shoe boxes caught images of people standing on their heads.

Anita used four of her cameras, converted from talcum powder to soup tins, each around six inches tall. A hole in the centre of the long side acts as the lens. For the mathematically minded, she explained the formula linking the pinhole size and the focal length.

A meter reading and a good look at the sunlight, and Anita decides on an exposure of 8 minutes. The cans, er, cameras in place, there is nothing to do but wait. Nothing can alter the result in the making. Even a bystander walking between the object and the camera makes no difference: what is a split second, in a long stretch of time such as 500 seconds? Somewhat like a lone, insignificant life in universe. In that state of guilt-free contemplative calm, the photographer gets to observe the sunlight and diffusion, think about the solar system, meditate...

Exposure over, the tins are sealed light-tight and taken to the dark room. In the faint red light from a lamp she had assembled, Anita takes out the photo sensitive papers from the cameras and develops them in chemical trays, for duration she judges based on the strength of light during exposure. 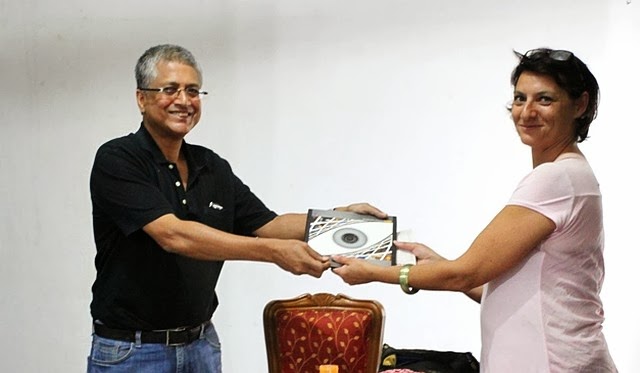 “See, see”, she says, and slowly, images form on the sheets. Anita has used negative paper, so the results are even more surreal, adding to the natural distortion somewhat resembling the fish eye effect.

‘You never know what to expect”, Anita had said at the introduction. So true. Pinhole photography is a little like a pilgrimage and a penance, where the frugal processes and the challenging passage can themselves be the reward. Anita describes it as “ a mountain to climb”, but agrees that it also appeals to the child in us. There is a fun side to pinhole photography and there is an artistic side, of capturing the whole atmosphere and the large picture, not worrying about small details. There is a spiritual side to it and a scientific side.

There is also a comforting side: you can drop your camera without breaking your heart or your bank deposits!  :))