Proud to announce that Mr.Prasana has consented to be a reviewer  for Behance portfolio review -Oct 31 2015 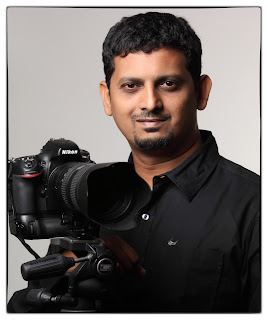 R.Prasana is a  self taught  professional photographer from Chennai,India specialising in commercial and advertising photography.He is now the Official photo mentor of Nikon for Tamilnadu and PondicherryPerformance in field of PhotographyThe year was 2000 ,his first break was for The Hindu Folio and from then on he has struggled a lot to prove himself. The major hurdle being that he was new to Chennai  and has not assisted anyone to this day. Apart from a  workshop under Mr.Iqbal Mohammed at The Light& Life Academy  he is totally self taught.After the initial struggle to gain acceptance in the industry ,he slowly started getting good offers from  magazines and advertising agencies. His parents were worried initially since he was from an academically inclined family. But soon they realized his passion and have been very supportive from then on.Now  he is one of the most sought after professional photographer in India for major retail and corporate clients as well as celebrities like Ilaiyaraja, Dr.K.J.Yesudas and many more. His  innovative style,friendly disposition, humor and creativity have got  him  clients like  Rolls Royce Motors, Mahindra Homestays ,Kalakshetra Foundation ,Wallem Shipping International,  MGM Dizzee World,CMR shopping mall,Lavazza, Chennai silks,Kone Finland,Niklas Oppermann London ,Ashok Leyland, Agri Gold, Diamond Chains,Transform Designs among many Published Works              His   pictures have graced the covers of prestigious books from Penguin publishers. Some of them being Where the rain is born by Anita Nair, Memories of Malgudi (R.K.Narayan) A Place To Live, Chasing the Monsoon etc.,His work has appeared in several regional and National magazines like Better Photography, Discover India, Ananda Vikatan, Smart Photography, Alive, Times journal of Photography, The Hindu Folio, Kunkumam, Harmony, Outlook Traveller etc.Apart from magazines his works have also appeared in WWF Greeting cards, National Human Rights Commission(NHRC) calendar 2003&2004 and ITC Greeting Cards.He has also been featured on Jaya Tv(Kaalai Malar) and Makkal TV(Jannalukku Veliye and Live QA show) ,NDTV Hindu(Mission Makeover) for his photographic skills.Recognition for PhotographyIn 2004 his work titled Faded Mirror won him an Award in the prestigious Kodak Calendar Competition. This was a national level competition .Apart from that his work has also won prizes in Junior Vikatan Visual Taste ,Alive Magazine competition. Recently in April 2010 his portfolio was featured in The SHOWCASE section of Smart Photography Magazine. He also conducts  workshops on photography for professionals as well as beginners.On 16th September 2013 and January 4th 2014 one of his photos got featured in the National Geographic Your Shots Daily Dozen.Career HighlightsOfficial photographer for US Seceretary of state Ms.Hillary Clintons visit to Kalakshetra in 2011Official photographer for President of India Shri.Pranab Mukherji's visit to Kalakshetra on August 7th 2013Photoshoot for Rolls Royce Motor Cars  new car Wraith on location in Chennai  in Sep 2013On 16th September 2013 one of his photos got featured in the National Geographic Your Shots Daily Dozen.http://yourshot.nationalgeographic.com/photos/1898249/One of the Jury in prestigious  Behance Portfolio Review conducted in Chennai for the first time in India on 9thNovember 2013 On January 7th 2014 one more of his photos got featured in the National Geographic Your Shots Daily Dozen.http://yourshot.nationalgeographic.com/photos/2633799/On May 27 one of his images got published in the Daily Dozen section of National Geographichttp://yourshot.nationalgeographic.com/photos/3612369/
Posted by PSM-1857 at Monday, October 26, 2015